Explore the geopolitics of climate change in Troubled Lands, a 30-min educational game for ages 10 to Adult. Playable as a classroom activity and ideal grades 6 through college, it is a simple to learn yet morally provocative game that requires players to address competing motivations of self-preservation and group loyalty. Many sustainability themes including communal negotiation, governance, inequality, power, and the tragedy of the commons are present in the game. Troubled Lands has been successfully used to support learning in many courses. Troubled Lands is a revised version of a game called The Farmers about which several academic articles have been written.

Shown here are the characters in Troubled Lands: a lumberjack, farmer, and rancher, who metaphorically represent nations in a climate change debate, each of whom have their own strengths, weaknesses, and special interests. 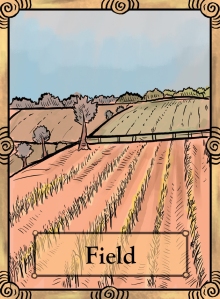 Like several other environmental and political games, players share a common space in danger of environmental collapse. Yet, rather than telling players to work with or against one another, the goals are more like those found in everyday real life: players are given the objective of meeting their own needs and allowed to decide for themselves when to assist or be self-protective. Additionally, players assume different roles (a farmer, rancher, and lumberjack) each of whom who has different goals and abilities, some much stronger than others presenting inequality that the players must face. The game thus emulates many situations in real life including environmental debates and international politics in that (1) all, some, one, or none of the players can win, (2) there is inequality among the players, (3) players have goals they must meet that are independent from other players’ goals, (4) players share common pool resources, and (5) no one knows for certain exactly how much the environment may be pushed before collapse. The game incorporates elements from game theory and popular games to elicit a unique psychological experience, complete with moral claims and dialogue among players. In other words, Troubled Lands gets to the heart of real life socio-economic interaction in a way that is easy to learn but rich with emotion.

A Game With Impact 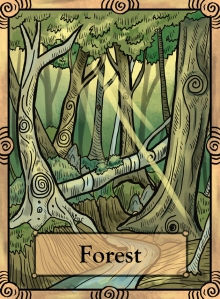 Student players have said “every high school and middle school student should play this game.” Teachers say it’s one of their students’ favorite activities in the year. Troubled Lands has been used for introducing topics like sustainability, political debate, and community resilience, and even in creative writing classes because of the rich moral experience it evokes. Contact me and I can put you in touch with teachers who have used Troubled Lands.

Visit the downloads page for the rules and all of the materials you will need to play in addition to academic articles that have been written about Troubled Lands.